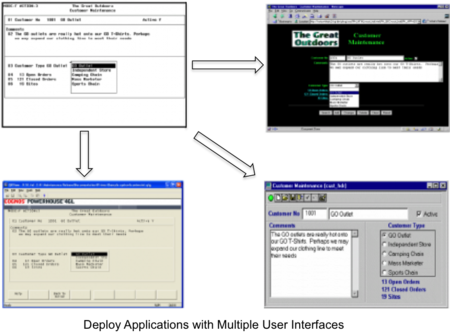 With PowerHouse, your developers can conquer both quality and time-to-deployment challenges through simplified programming requirements and open access to multiple databases and file systems. Flexible PowerHouse design tools enable business solutions to be built quickly and modified easily, often delivering time and cost savings of up to 90% when compared with programming languages such as COBOL, BASIC, C, C++, or Java.This enables your developers to focus on what the applications need to do—not how they will do it.

The PowerHouse family is currently in use worldwide by thousands of customers, and is used by many partner organizations to create both off-the-shelf and customized solutions across many industry sectors—including finance, HR, manufacturing, distribution, logistics, telecommunications, and customer service. 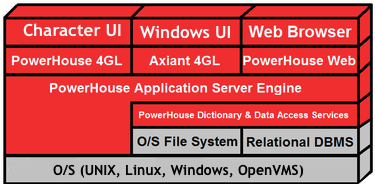 At the heart of the entire PowerHouse solution—which includes PowerHouse 4GL Server, PowerHouse® Web, and Axiant® 4GL—is the PowerHouse application server engine. Refined and performance-tuned over many years of ongoing research and development, this engine contains sophisticated processing models that encapsulate our extensive knowledge of data-driven business applications. It knows how to access and update various types of files and databases; it knows about the relationships between data in business applications, and how they affect processing; how data is validated on entry and formatted for display; and how to handle exception conditions when they arise.

Using just a few statements of the PowerHouse 4GL high-level specification language, your developers can create programs that control how the default PowerHouse business processing models are applied to your data. This allows them to concentrate on what the application is to do, rather than how it will do it. Specification-based programming not only enables developers to focus on functionality specific to your business requirements, but because there is simply less code to write, you benefit from significant time and cost savings in both initial development and ongoing maintenance.

As Simple or as Sophisticated as You Need

With PowerHouse, developers can start with a default application as their core code. As they become more familiar with PowerHouse, they can override the defaults using simple English-language keywords. Finally, if the default processing and non-procedural specifications they have added do not provide exactly what is needed, they can take full control and make use of the robust PowerHouse procedure language to tailor a sophisticated application to your precise business requirements.

PowerHouse has been designed to run on a wide variety of application servers - UNIX, Linux, Microsoft Windows, and OpenVMS - protecting your existing platform investment and providing flexibility for the future. 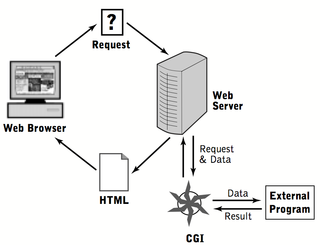 The Web browser is fast becoming the user interface of choice because it is much easier for users to master than typical Windows-based applications, and because it is the only requirement at the desktop—which greatly simplifies traditional client/server computing. Applications reside on centralized servers where they are more easily maintained, saving both time and money in IT administration activities.

Executive decision-makers are also attracted to the Web as a channel for extending the organization’s reach. Through the Internet, an organization can selectively open up its information and application resources for improved customer service, additional sales channels, or alternate communication channels.

PowerHouse Web satisfies all of these requirements by enabling you to deploy advanced data-driven solutions to the Internet or intranets quickly and easily. Select features of enterprise applications, such as Human Resources, Sales Order Processing, Inventory Management, Customer Service, and Billing can be presented to users, customers, and suppliers through an intuitive Web interface.

No Time for 3GL-Based Tools
When users are knocking on the door your development team does not have time to learn one of the many 3GL-based Web development tools that are now on the market. With PowerHouse Web, your team can be productive immediately. They can develop applications and generate an HTML interface with PowerHouse 4GL or Axiant 4GL, benefiting from the renowned productivity of these tools, and then deploy the application to the Internet or intranet with PowerHouse Web.

Increased Reliability and Scalability
PowerHouse Web’s scalable, distributed architecture allows you to locate your Web server, application server, and data server anywhere you want in a heterogeneous network. PowerHouse Web handles user requests through a distributed processing environment that minimizes or eliminates failure points and spreads the processing workload across multiple application server machines. Because processing can be distributed across many machines, the system can handle increasing numbers of users or greater workloads without affecting response times. 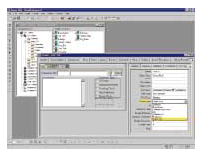 Build Once, Deploy Many Times
Axiant enables your developers to create solutions in a Windows based environment, but then deploy them to Windows, Web, or terminal-based users in a variety of flexible and scalable thin-client, fat-client, mobile/standalone, and server-based topologies—according to application need and available infrastructure.

Time-Saving Object-Based Development
Axiant wraps a sophisticated object-based visual development environment around the PowerHouse engine—so your developers still benefit from the flexibility and speed of this high-powered environment. In addition, Axiant supports object-oriented techniques, such as inheritance and reuse, without the necessity to learn object-oriented programming languages. For example, because the user interface form for each interactive program inherits its visual appearance from a single such form, the style of the user interface for an entire application can be developed and modified by altering objects in the one inherited form. PowerHouse data elements, tables and programs are represented graphically, enabling developers to create applications quickly and pinpoint errors easily.

Offline Development
Axiant utilizes a multi-user object repository to store data definitions, application logic, and user interface forms. This makes it easier to manage team development projects. It also enables developers to save selected portions of a development project onto their own PC and work disconnected from the repository for continued productivity away from the office.

Reuse Rather Than Replace
If you are already a PowerHouse customer, Axiant enables you to further protect your existing investments in solutions and developer skills, by re-deploying terminal-based PowerHouse applications as thin-client Windows solutions using your existing UNIX, Linux or OpenVMS servers and data. Axiant also contains sophisticated facilities that can advise on, and help automate, the migration of your server-based PowerHouse applications to new client/server or relational database environments.